This website uses cookies. By using and further navigating this website, you accept this.
Dismiss
Did you know that FlightAware flight tracking is supported by advertising?
You can help us keep FlightAware free by allowing ads from FlightAware.com. We work hard to keep our advertising relevant and unobtrusive to create a great experience. It's quick and easy to whitelist ads on FlightAware or please consider our premium accounts.
Dismiss
Return to Browse Photos
Upload Your Photos
Share This
(Register or Login)

Submitted about a year ago
8 of AALF 1 of BKB5

Phil PrestonPhoto Uploaderabout a year ago
It's a photo process called High Dynamic Range. Not a "special effect, William. That would be like something from a Guardians of the Galaxy movie. You'll be seeing more HDR processing in the future if you own a new 4K television set. Till then just look the other way.
Report

Larry Tolerabout a year ago
Looks cool to me, Phil. What aircraft is it? I see two props, a jet engine, and a drop tank.
Report

Paul Wisgerhofabout a year ago
Appears to be a B-50 used as a test bed for the jet engines used on the B-47.
Report

Mark Ryallsabout a year ago
Thanks for the information Greg and the link.
Report

Greg Byingtonabout a year ago
You bet, Mark!
Report

Graham Bwdnabout a year ago
Little too much HDR for my eye but a great shot none the less.
Report

jthylandabout a year ago
B-29 with the bigger R4630 engines.
Revisions to the B-50 (from its predecessor B-29) would boost top speed to just under 400 mph (644 km/h). Changes included:
More powerful engines
Redesigned engine nacelles and engine mounts
Enlarged vertical tail and rudder (to maintain adequate yaw control during engine-out conditions)
Reinforced wing structure (required due to increased engine mass, larger gyroscopic forces from larger propellers, greater fuel load, and revised landing gear loading)
Revised routing for engine gases (cooling, intake, exhaust and intercooler ducts; also oil lines)
Upgraded remote turret fire-control equipment
Landing gear strengthened and takeoff weight increased from 133,500 lb / 60,555 kg to 173,000 lb / 78,471 kg
Increased fuel capacity with underwing fuel tanks being added.[14]
Improvements to flight control systems (the B-29 was difficult to fly; with increased weights the B-50 would have been more so).
Nose wheel steering rather than a castering nose wheel as on the B-29

Redesigned with a large upper fuselage grafted on, the B-50 design would form the basis for the Boeing 377 series of airliners and C-97/KC-97 military transports, with 816 of the KC-97 built. The B-29 and B-50 were phased out with introduction of the jet-powered B-47 Stratojet. The B-50 was nicknamed "Andy Gump" because the redesigned engine nacelles reminded aircrew of the chinless newspaper comic character popular at the time.
Report

William Tuckerabout a year ago
The KB-50J had J-47 jet engine pods under each wing for added speed when refueling jets. The pods beneath the wingtips housed hoses for the probe-and-drogue refueling system. 112 B-50s were converted to KB-50J specifications.
Report

brian dubeyabout a year ago
My historical guess is it is a B-50 with the jet engine and the extra built in fuel tanks on each wing. The B-29 was used as the test aircraft for adding jet engines not for the B-47 but for the next generation of bomber the B-36
Report 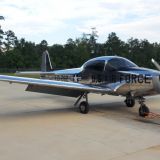 Jeff Davisabout a year ago
What is the windscreen doing on the mounting pylon of the outboard "drop tank"? Was there a man in that pod during flight??
Report

cliff731about a year ago
Jeff Davis - No, not a man inside nor a crew station located there. More likely that's a clear glazing over a light... a wingtip taxi light perhaps.
Report

Ross Meyerabout a year ago
Its a KC-97
Report

Greg Byingtonabout a year ago
Phil, while I do like your pic, I don't understand what "AALF" means. You have it on all your pics, but it isn't a Reg/SN number, nor is it the ICAO code for the aircraft type. So, what is it?

And Ross, if you had read the earlier comments you would know that this aircraft is NOT a KC-97. It is a KB-50J.
Report

Phil PrestonPhoto Uploaderabout a year ago
Beats hell out of me, Greg. I didn't put AALF there. Might be something Flightaware tags on for some reason.
Report

Greg Byingtonabout a year ago
Hmmm... That is curious about AALF. I wonder why that is. In any case, this is a nice pic, Phil.
Report