Southern Air's N496SA is captured here (for its first-ever appearance in FA's photo gallery) as it slows after landing on runway 16L at Reno.

Gary SchenauerPhoto Uploader6 years ago
When I heard that Southern Air was going to be flying a daily into RNO, I was super excited as I was hoping to get some clicks of either an SOO 747 or a 777. Thus far; however, it has been one of their fleet of five 734s that has arrived here each day. But as the holiday cargo shipping increases, I'm thinking there is still a chance that I'll be able to snap one of Southern Air's larger fleetbirds.
Report 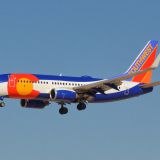 Matt Winhall6 years ago
This is awesome Gary!
Report

Gary SchenauerPhoto Uploader6 years ago
Thanks for the compliment, Matt. :-)
I caught a real sweet break on this particular day. When this one was still about 5-6 minutes out, the maintenance crews at RNO closed the parallel 16R-34L, which is 2000 feet longer and is the usual runway used by the airlines and cargo lines, for sweeping. The closure meant that everything was going to be landing right in front of me on 16L. As a result, I got a dozen excellent snaps of this one from tire-touch to rollout, and there was an Allegiant MD inbound right behind it so I got the same super shots of it. When I heard that the other runway would be closed for an extended time period, I settled in for a fine day of spotting. lol
Thanks again for the comment.
Report

Gary SchenauerPhoto Uploader6 years ago
Hey, hi, Uwe. (Friendly wave) I was replying to Matt and didn't see your comment right away. Many Thanks to you for your comment, too. I appreciate it very much. I was pleased to discover that this pic would be the first one in FA's gallery of this cargobird, but my fingers are still crossed that SOO will bring in either a 747 or a 777 soon.
While I'm replying to you, let me add ... Please keep your posts coming. Superior shots every time. (*Thumbs Up)
Report

Many pics at FA are with very bad quality and have 5 stars. I don't understand this fact. But when i was seen this picture it keeps me a litte smile. Perfect 10 x 5 stars when it's possible!!
Report

Gary SchenauerPhoto Uploader6 years ago
Uwe, the main reason why this happens is because FA is a free-membership site. It is wonderful that Mr. Baker and everyone at FA has this photo gallery for everyone to use for free, but because it is free to join, there will always be some losers who join. Then, they do several things. 1) They go on other sites, find someone else's pics, and post them here as if they took the pic. 2) Then, they join FA with several different anonymous names (because they are too gutless to use their real name). 3) Then, they post the stolen picture, vote a "5" on it, log in under another of their names, and vote on it again. So the picture ends up with many "5" votes. 4) Also, there are others who just post any lousy pic they take just so they can photobomb the gallery and run up their photo count. 5) And there are others who use PS to create beautiful backgrounds, cut-and-paste parts of one picture on to another, etc., and then they post it as though they really took it with a camera.
Here is what I do. Just write down the names of the FA members who post their own photos and who post the best that they are able to take. The picture doesn't always have to be crystal sharp; I know some FA guys who don't have the $ to have an expensive camera and a whole bunch of lenses, but they are always out there in all different kinds of weather, in daytime and at night, trying out new ideas and trying to improve. And they don't post garbage pics or fake pics and they only post their own. I write down their names and when I'm able to go on to FA, I check out their folders. And, Uwe, never ever be concerned about the number of stars. There is only ONE rating that is important, Uwe, and that is what YOU feel about your pic. If you know it is something you are proud of, that is all that is important, my friend. (And your pics are ALWAYS awesome.) (Two Thumbs Up)
Report

Dwight Hartje6 years ago
Outstanding shot, Gary! I is Southern Air part of DHL? As for the new camera, I have asked for it for Christmas. BTW,I was jest in a H60M (The newest version) in a hanger at a National Guard facility. Photos will be coming soon. It is possible I might be able to get a ride in one, one of these days.
Report

Gary SchenauerPhoto Uploader6 years ago
Thanx, Dwight. :-)
SOO has a DHL Express contract (which was just renewed recently).
Getting "insider pics" of a 60 is wonderful; getting a ride in one will be beyond awesome! Congrats on getting the close-up tour (I'm looking 4ward to your posts from that) and Best Hopes that you will get that ride. (High five)
Report

Guido Warnecke6 years ago
Well said, Gary.
Your point no 4 is a good example.
"LEARJETMIAMI" is a good candidate for this category.
Happy Landings,
Guido
Report

Gary SchenauerPhoto Uploader6 years ago
Guido: I took a look ... and I see what you mean. I just went thru a few recent pages of posts and then I gave up. Not worth my time to view more. Years of posting but not one speck of improvement. Geesh. Nothing but digi-card dumping going on. But notice how few views those pics are getting. Legitimate FA members and viewers who are honestly interested in aviation photography aren't bothering to look. Neither will I, and neither should you. A lot of it is pure junk; don't add to the number of "views" by clicking on them to comment. It's like talking to a slug; the slug just keeps crawling along leaving a trail of slime. There are lots of truly legitimate photogs contributing to FA whose posts we CAN enjoy.
Thumbs Up, G.W.
Report