C.W. Reed3 years ago
I think Air Canada should bring back this livery! 5 stars! thank you pelican! Cheers!!
Report

Jim Costello3 years ago
I am filled with thrills at the sight of this big old bird in majestic livery. CWR + JC ad idem.
Report

Michael Bishop3 years ago
I agree, C.W.! This is the best livery ever, way better than their grim new black and white effort.
Report

Ryan Kehler3 years ago
Beautiful aircraft and there’s no doubt that Air Canada should go back to the red and white, like our flag.
Report

Edward Ludwig3 years ago
My first overseas tour to the ROK was on a World Airways DC8-60. Beautiful aircraft!
Report 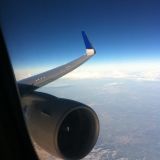 Martin Coddington3 years ago
"60" was a series but not a model. This looks like a 63 but without a closer look at the engines, hard to say.

A neat picture of one of Douglas' best.
Report

Bill Mortensen3 years ago
Another vote for a return to this AC livery!
Report

ROBERT MILLS JR3 years ago
The DC-8 series airframes were built like tanks.
We were on a Trans International Airlines Charter, TIA DC-8-63, on final at Bangor, ME (ATL-BGR), July 1975, fully loaded at MTOW.
We were at about 20' above the runway when the aircrew activated the thrust reversers.
We sunk immediately and incurred a very heavy impact first on the left mains, then right, then left.
I was in right isle seat and I remember being swung maximally over the left armrest and looked at all other aisle passengers in front of me in same position, hearing other passenger heads hitting the left cabin wall, then, the opposite side, then back to the left side.
It was just a refuel stopover, so, we exited the airplane after much talk about the hard landing.
I diverted out of the line to the terminal to the left mains, and, they were with full tread, apparently new tires, but, there were bald spots across all four of the left main tires right down and deep into the cords.
I was shocked at the damage as a teenager.
Then, when we took off from BGR and landed in Bergen, Norway (BGO), both taking off and landing, the main tires were so loud from being bald and thumping all the way from the terminal to airborne, etc., that I'll never forget it.
I remember then and still think that Donald Douglas Sr. built those Douglas airframes TOUGH!
Report