Submitted about a year ago

ken kemperabout a year ago
Joseph......

Great photo......now that is the VIP Treatment
Report

Chris Croftabout a year ago
Joseph, is this a photo of an active duty/Reserve Navy A3? I'm confused as to why a civilian VIP bird would need to deploy a drogue chute and fold the wings
Report

144865 Taken on strength in April 1960 and assigned to Heavy Attack Squadron 123 (VAH-123) at NAS Whidbey Island, WA. By February 1966 it was assigned to Reconnaissance Attack (Heavy) Squadron 3 (RVAH-3) at NAS Sanford, FL. As time when by it was sent to the Naval Aircraft Rework Facility at NAS Alameda, CA, and converted to a staff transport as UA-3B, and was then assigned to Fleet Logistics Support Squadron 1 (VR-1) at Andrews AFB, MD. On Apr 3, 1974 the plane was retired to Davis-Monthan AFB, AZ as 2A0097, but taken back in service in September 1980. By 1986 it was assigned to Fleet Air Reconnaissance Squadron 1 (VQ-1) at Whidbey Island. In 1987 it was transferred to CTAS (I have no idea what that is) where in 1989 it was converted to an ERA-3B electronic aggressor aircraft and then assigned to VQ-2 at Whidbey Island. In August 1989 the plane was bailed to Chrysler Corporation; the next month it was bailed to Hughes Aerospace and assigned the civil registration of N575HA. By August 1990 it was back with VQ-2 as an EA-3B, and was later deployed to Saudi Arabia for Operation Desert Storm, returning home ca.April 1991. In 1994 the plane was bailed to Raytheon Corporation as RAYCO 75 and assigned the registration of N875RS operating out of Van Nuys Airport, Los Angeles, CA.
On 6/20/11, the plane was flown to the Naval Aviation Museum, Pensacola, FL for permanent display. 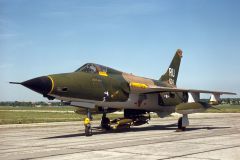 jthylandabout a year ago
All Three Dead, A3D. No ejection seats.

jcwalkerabout a year ago
iffmode4: The VIP that was referenced was the Chief of Naval Operations. He would use
it to visit the various Naval installations. I worked on the tanker version of the A3 while I was in the Navy.. Check a3skywarrior.com for more info on the A3.
Report

John Rumbleabout a year ago
@ Charlie Burgwardt
Same Family same lineage as a B-66
https://en.wikipedia.org/wiki/Douglas_B-66_Destroyer
Report

Chris Croftabout a year ago
JC, I understand the purpose/mission of the A-3 as a fleet logistics,VIP transport. ADM Zumwalt was the first CNO to convert a Skywarrior for his personal use. Mainly because the A3 has a tailhook,and he could drop in on fleet carriers unannounced. My confusion was because the photo description did not say whether it was a vintage photo of a military A3, or a photo of a vintage aircraft being used by civilians, current day.By the way, I served with VAK-208 for 3 years. I don't care to remember how many of those drogue chutes I re-packed. Thanks for your comments shipmate.
Report

M Bodkinabout a year ago
When I got out of "A" School in '67, my first assignment was VQ-2 in Rota. Worked on EA-3's, but as an ADJ, my contact with the EC121M's was limited to ground duties. This photo brings back a whole lot of memories.
Report

William L. Pickett Jr.5 months ago
Chris Croft the drogue chute I would guess be because instead landing on a carrier with the "3" wire across the deck. Its landing at a base with a runway and not enough brake for it to land on a runway. And Charlie Burgwardt it is about near identical aircrafts. The Air Force used the B-66 and various versions of that particular airframe. The Air Force version had ejection seats and the Navy A-3 did not have them.
Report